The spark that ignited his imagination

When he started with this project, Denman only had the seed of inspiration. I knew I wanted to make a game that revolved around soap bubbles, but I didn’t know what that game would be like. The extensibility and modular design of the Unity editor gave him the freedom he needed to experiment.

“To see what was fun and what wasn’t, I decided to make an editor within Unity, you know, to be able to play the game and try it immediately, come back, move things from one side to another. The flexibility of the Unity editor really Improved game design.

“Unity frees me from having to worry about those things I’ve invented before,” Denman said. “Instead, I can concentrate on more interesting technologies that I haven’t tried yet. Bubble physics is a great example of that.”

“In addition to providing his own tools, Denman also used many of those that already existed in the Unity Asset Store, and notes that they provided him with an incredible ROI.”

“Sometimes you don’t understand all the work and the adjustments that are required to finish a project and make it work in such a competitive market. But when you put your game in view of the players, you realize and say, ‘God, I have to add an effect here. I have to improve the look of a function there. ”

“Therefore, entering the Asset Store and finding a tool there (probably 100 times less than what you would spend creating it yourself) is an amazing thing. It certainly saves you a lot of time,” says Denman.

In addition, it often happens to you that the assets you acquire for a certain reason end up having other hidden benefits in other aspects. TextMesh Pro  was a good example of that:

“I started using TextMesh Pro to add icons in the text, and not only allowed me to do it quickly and efficiently, and for very little money, but it also had a huge amount of other great features that I could take advantage of and didn’t expect” .

Playing with bubbles: a universal right?

The result of Denman’s tests was an award-winning game, with more than 160 attractive puzzles. The game reflects the true physics of bubbles in the real world regarding pressure and surface tension, interaction and chain reactions.

“Bubbles are a fundamental part of human life. There is something fascinating about them that captivates everyone, regardless of age, sex or culture. I wanted to offer a new and incredible way to play with groups of bubbles to as many people as possible, including colorblind people and those who depend on visual trackers, but to achieve that, I needed to take it to as many languages ​​and platforms as possible, and that is definitely one of the big reasons why I chose Unity “says Denman.

Using the  I2 Localization plugin  of the Asset Store, Denman was able to store all of his languages ​​in a Google spreadsheet. Then he managed to share the spreadsheet with the translators. Once approved, the text was automatically entered into Unity.

“I was totally surprised at how ridiculously simple it was. It would probably have taken me two months or more to create the same software. I did locate a third of the game in a single day, including integration and tutorials. And that will save me thousands of hours “, He says.

Once he created the prototype, Denman was eager to see how people responded to his tests and what they would end up doing in the game. To do this, he enabled Unity Analytics and started sending it to his friends.

The Unity Analytics control panel allowed you to observe things like, for example, which levels require more attempts to win or at which people stop playing the game. In order to base certain potentially critical business decisions on solid data, Denman plans to continue using Unity Analytics when the video game is in beta.

Will they ay to play

An important decision that Unity Analytics will help with is Denman’s business model in relation to monetization.

“At this moment, the market represents a challenge, and that is why it is very important that you choose the best model according to the platform and the market. All these markets have different types of players, so it is essential to test the retention of each of them in order to get an idea of ​​which one will allow you to earn more money.

“Sometimes, if the retention is lower, it is better to have a premium version, and, if it is higher, it is more convenient to have a free game. Unity Analytics allows you to analyze the retention and make a decision based on the data.”

In order to be ready for a free gaming audience, Denman plans to complement Unity Analytics with Unity Ads and IAP. You have already incorporated ads into your design in a way that will offer a good gaming experience for different types of players.

“I use rewards-based ads for clues, power-ups and puzzles. If the player has difficulties and needs help, he can watch an ad and get a reward as a clue. The clues make the game more accessible to an audience broader. They allow casual players to overcome some of the most difficult puzzles, in which a more experienced player would prefer to make the effort and discover the solution. ”

Denman has taken full advantage of what Unity offers. First, the flexible and modular design helped him to follow his interest when he barely had a minimum notion of what the final game would be. Then, the Unity Asset Store and its own custom tools allowed it to focus on the main aspect of the game. Finally, Unity Analytics, IAPs and ads are helping to guide the game in a way that will allow you to convert all your hard work into money. 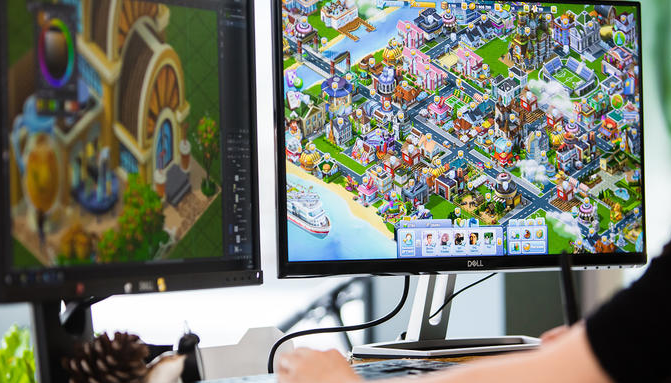 Playkot: a case study of Unity What did an entrepreneur and software developer who worked at an impromptu kitchen table in St. Petersburg, Russia do...